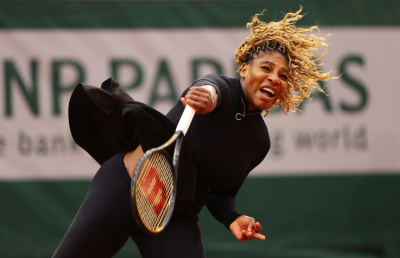 US Open champion Dominic Thiem also moved into the second round with a 6-4 6-3 6-3 win over Croatia's Marin Cilic.

The 27-year-old Austrian, who won his maiden Grand Slam title in New York a fortnight ago, has lost to Nadal in both of the past two finals at Roland Garros.

The pair have been drawn in the same half of the men's singles, meaning they could only meet in the semi-finals this year.

The 19-time Grand Slam singles champion, who is aiming to move level with Roger Federer's all-time leading men's tally, has only played one clay-court event going into Roland Garros and the cooler conditions are not as beneficial to his game.

Meanwhile Serena Williams began her quest for a 24th Grand Slam title with a hard-fought win over fellow American Kristie Ahn in the French Open first round.

Once she came through a 74-minute opener, Williams began to play with more belief and clarity as she swept Ahn aside in a 27-minute second set.

Williams will play Bulgaria's Tsvetana Pironkova in the second round.

Williams, who has won three of her 23 Grand Slam singles titles at Roland Garros, raised her level in the tiebreaker and did not look back from there.

"The biggest difference was just confidence,"Williams told reporters. "I just need to play with more confidence, like I’m Serena. So that was it.

"I just started playing like that, opening the court and moving and sliding. I do think her level dropped a little bit in the beginning of the second set and I took advantage of that.”

The American, bidding to match Margaret Court’s record 24 Grand Slam titles, hit her 11th ace on her fifth match point to seal the victory in an hour and 41 minutes.

Tweet
More in this category: « 2020 Mzansi Super League postponed to 2021. Motupa looking forward to the challenge that comes with playing for Sundowns. »
back to top