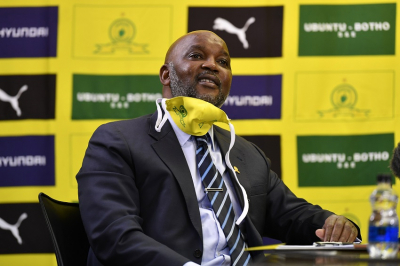 New Ah Ahly coach Pitso Mosimane has thanked the club’s management led by president Mahmoud El Khatib and pledged to give his best for the Egyptian Premier League club.

Mosimane has also pleaded with the Red Devils supporters to give him a chance, saying he will do his best to take the club to dizzy heights.

"Greetings to everybody at the Al Ahly club. I’d like to greet everybody, captain Bibo (El Khatib) and all the board members of Al Ahly for entrusting me,"Mosimane said to the club’s Twitter page.

"With the difficult task at hand, they have shown confidence in me and the belief that I can take the team to a bigger space."

Mosimane is considered one of the most reputable head coaches in Africa as he led Mamelodi Sundowns to 10 trophies during eight years in charge of the club.

He most famously guided them to the 2016 CAF Champions League, when they beat Al Ahly’s rivals Zamalek in the final, as well as the CAF Super Cup.

Mosimane put pen-to-paper on a two-year contract that will keep him at the club until 2022, and will become the first foreign coach from Africa to take charge of Al Ahly.

The Reds will face Wydad Casablanca in the semi-finals of the CAF Champions League as they eye their ninth title in their history.

Our Ambassador in South Africa congratulates @TheRealPitso on his new appointment as the head coach of the African club of the century ??❤️??

To Masandawana, the Yellow Nation ?? pic.twitter.com/N2DYLcTN0y