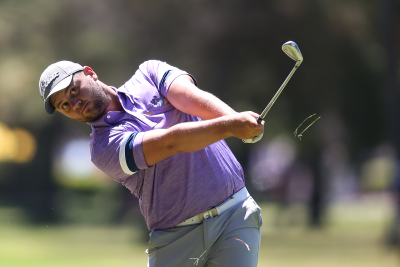 Daniel van Tonder eagled his last hole of the day to give him a three-stroke lead going into Friday's final round of the Vodacom Championship Reloaded at Huddle Park Golf Club.

It was another emphatic display of his current dominance on the Sunshine Tour's Rise-Up Series. Teeing off the 10th with a one-stroke lead, Van Tonder came through 14 holes of his second round tied for the lead with Jacques Blaauw on 12 under par.

The Johannesburg golfer then birdied the par-five sixth – his 15th hole of the day – and eagled the ninth to sign for a 66 that puts him top of the leaderboard on 15 under par.

Blaauw posted a second round of 67 to be his nearest challenger on 12 under par. Malcolm Mitchell and Adilson da Silva are currently tied for third place on 11 under par following respective rounds of 68 and 64.

A victory for Van Tonder on Friday would not only give him his third win on the five-tournament Rise-Up Series, but it would also be one of the most dominant performances in recent history on the Sunshine Tour.

Van Tonder has already won two of the last three tournaments on the Sunshine Tour, and is now looking for a run of three wins in four tournaments.

Blaauw will be pleased with his position going into the final round as he seeks to claim his first victory since 2016. And history certainly bodes well for him. Of his four career victories on the Sunshine Tour, three have come in Vodacom sponsored tournaments.

And Da Silva may also feel confident at four shots off the lead. The Brazilian started the Rise-Up Series with finishes of sixth and second in the first two tournaments.