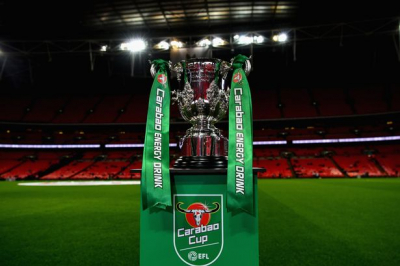 Arsenal beat Liverpool 5-4 on penalties to reach the quarter-finals of the Carabao Cup after the sides drew 0-0.

The sides played out a 5-5 draw at Anfield before last season's penalty shootout, won by Liverpool, but this was a considerably less exciting match.

Both sides struggled for fluency after making numerous changes from their Premier League meeting on Monday.

Arsenal will now host Manchester City in the last eight, with all ties to be played in the week commencing 21 December.

And Brentford gained revenge over Fulham - who beat them in the Championship play-off final last season - with a 3-0 home win.

Vokes headed the winner against a much-changed Villa side, with Stoke reaching the last eight without conceding a goal.

Brentford were denied a place in this season's Premier League when Fulham claimed a 2-1 win at Wembley in the play-off final to earn promotion from the second tier.

Marcus Forss scored the opener in the 37th minute before Said Benrahma added a second half double to put the result beyond doubt and earn a first-ever League Cup last eight tie for the club.