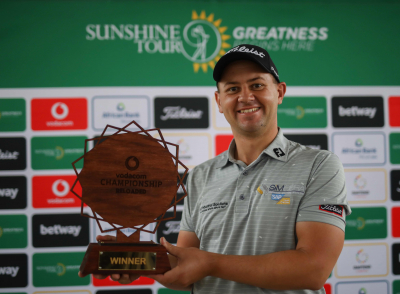 Van Tonder wrapped up the Sunshine Tour's five-tournament Rise-Up Series with another emphatic victory at Huddle Park Golf Club on Friday as he closed with a 66 to win the Vodacom Championship Reloaded by four strokes on 21 under par 195.

It marked back-to-back victories for Van Tonder after winning last week's Vodacom Championship Unlocked. And this was also Van Tonder's third victory in five tournaments on the Rise-Up Series after his earlier triumph in the African Bank Sunshine Tour Championship.

In fact, on this Rise-Up Series alone Van Tonder has managed to equal his three previous career victories won between 2014 and 2019.

And he also becomes the first professional to win back-to-back on the Sunshine Tour since Justin Harding in 2018, and the first to win three tournaments on the Tour since Oliver Bekker in 2017.

"It feels amazing. I've got the kind of confidence that I don't feel like I need to back down for any shot on the golf course. I feel like if I can make a swing, then there's no shot that's too tough for me. My wife and caddie Abigail plays a big part in that because she keeps me calm on the course and gives me that confidence," said Van Tonder.

Jaco Ahlers and Adilson da Silva shared second place on 17 under par following respective final rounds of 65 and 66, while Jacques Blaauw took fourth place on 16 under par with a closing 68.

Ahlers had his own reasons to celebrate as he won the overall Betway Birdie Challenge for the most birdies on the Rise-Up Series. Ahlers took the first prize of R25 000 with his 79 birdies, just beating Van Tonder into second place on 77 birdies. Van Tonder earned an extra R15 000 for his efforts here. And third place as well as a cheque for R10 000 went to Tristen Strydom with 73 birdies.

"I've just played really solid. I've been working hard on my game, and the putter warmed up as the series went on," said Ahlers.

Tweet
More in this category: « Matchday 3 Preview - Bayern Munich and Dortmund seek a swift return to their winning ways. Grobler wins big at SuperSport United,Modiba joins Sundowns. »
back to top