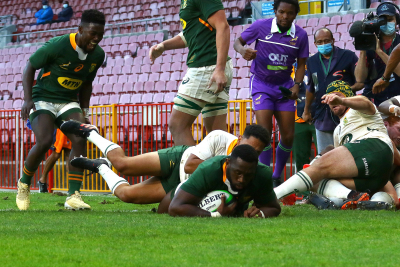 The Green team scored three unanswered tries to beat the Gold team 25-9 in the Springbok Showdown at Newlands.

Both sides were resolute in their defence which made it difficult for any sort of attacking rhythm to be built up.

The first half was Test match like but also blighted by errors and Damian Willemse missed two further shots at goal that derailed the efforts of a Gold team that seemed to be getting the upper hand later in the half.

Gold made some strides and kept the Green team pegged in their own half but a penalty goal from Curwin Bosch to make it 18-9 was all they had to show for their efforts.

A set move late in the match allowed Green to score their third try after a lucky bounce allowed Juarno Augustus to pounce and score.

Gold could not get a consolation score and the match would finish 25-9 in favour of Green.

Tweet
More in this category: « Rodriguez delivers masterclass as Everton go top with win over Brighton. Magpies too hot for sloppy Clarets. »
back to top