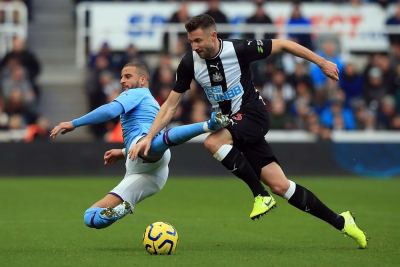 An attacking masterclass from Allan Saint-Maximin led Newcastle to their second win of the season as they beat pointless Burnley 3-1.

The French winger was in a swashbuckling mood, opening the scoring (14) with a fine individual effort before setting up Callum Wilson for the first of his two goals (65) after Ashley Westwood had levelled for the visitors (61).

An uncharacteristic error from goalkeeper Nick Pope - his loose control allowed Ryan Fraser to win a spot-kick which was converted by Wilson (81) - wrapped up the points for Newcastle. Steve Bruce's side are now in the top six.

Meanwhile Leeds United came from behind in stirring fashion to secure a thoroughly deserved point as they played out a thrilling draw with Manchester City at Elland Road.

In the battle of wits between City manager Pep Guardiola and his inspiration Marcelo Bielsa, Raheem Sterling's smart 17th-minute finish was the reward for an early siege on the Leeds goal.

In the glorious chaos of this end-to-end encounter, Leeds fought back to force two fine saves from Ederson at the feet of Stuart Dallas and Luke Ayling in the first half before his weak punch from a corner gifted substitute Rodrigo an equaliser on the hour.

Kevin De Bruyne hit the post for City in the first half and they had several near misses after the break but Leeds, bursting with energy, were a huge threat, Ederson rescuing a rocking City by turning Rodrigo's header on to the bar before saving superbly at the feet of Patrick Bamford.

Elsewhere former Paris St-Germain striker Edinson Cavani is due to fly into England on Sunday to join Manchester United.

The Uruguay international, 33, has been in talks with United and although there is no deal yet, it is growing increasingly likely Cavani will join on what could be a two-year contract.

Cavani is out of contract having left Paris St-Germain at the end of June.

He left PSG under a cloud following a disagreement with Neymar and feels he has more to give to European football.

United have been given a positive impression about the player's desire to play for the club and providing face-to-face talks confirm that impression, a deal will be done.

Tweet
More in this category: « The Greens beat Gold in the Springbok showdown. Brigid Kosgei retains her London Marathon title. »
back to top