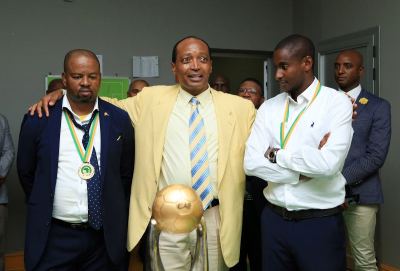 Mamelodi Sundowns have announced the appointment of Manqoba Mngqithi and Rhulani Mokwena as joint head coaches.

Sundowns president Patrice Motsepe said in a statement: "Manqoba and Rhulani have been with Mamelodi Sundowns for many years and were part of the technical team that were crowned champions of Africa in 2016 and have also won the Premier Soccer League and other titles in South Africa.

The board of Mamelodi Sundowns was particularly keen to appoint South African coaches and express its commitment and confidence in the talent and ability of our local coaches.

"Manqoba, Rhulani and the technical team at Sundowns will focus on defending the PSL and the other titles that we won during our historic 50-year anniversary.

"They will also advance and continue with the objective that we stated in 2004, which is to make Mamelodi Sundowns one of the best clubs on the African continent."

Sundowns are expected to make more announcements in the coming days ahead of the start of the new season later this month.

Meanwhile Al Ahly coach Pitso Mosimane has hit back at what appeared to be a jab directed at him by Mokwena.

Mokwena was rumoured to be on his way to Al Ahly as an assistant to Mosimane who left the Brazilians this week to join the Red Devils on a two-year deal which runs until 2022.

However, the 35-year-old mentor released a statement, indicating that he will be staying at Sundowns because he was 'loyal'.

The word 'loyal' didn't sit well with Mosimane as he felt Mokwena was referring to him after leaving Sundowns for Al Ahly.

Thank you very much, President. But somebody says I am disloyal to have gone over there! It is so unfortunate but God has taught me to forgive, as l keep marching on," Mosimane wrote on his official Twitter account.

Thank you very much President.????, but Somebody says I am DISLOYAL to have gone over there!It is so unfortunate but God has taught me to forgive, as l keep marching on.?☹️ pic.twitter.com/VxraH825N2

Tweet
More in this category: « Nadal sends pressure back on Dominic Thiem, Novak Djokovic. Arsenal beat Sheffield United 2-1,with Bukayo Saka and Nicolas Pepe on target. »
back to top