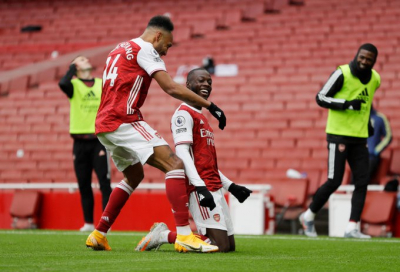 The Gunners did not really get going until the 60th minute when Bukayo Saka celebrated his first England call-up with a header from Hector Bellerin's cross.

Three minutes later they doubled their lead with Nicolas Pepe's good run and finish into the bottom corner - finishing off a move with 19 passes.

They looked completely in control until David McGoldrick curled home the Blades' first league goal of the season.

But it was not enough to affect the outcome and United have now lost seven consecutive top-flight games for the first time since 1975.

Meanwhile West Ham picked up where they left off against Wolves last weekend with another impressive display to end Leicester's 100% winning start to the season.

Boss David Moyes was again absent from the touchline as he continues to recover from coronavirus, but as in last weekend's 4-0 victory, it did not hamper the Hammers, who offered an excellent balance of graft and guile.

City remain second in the table, but could lose that spot with Liverpool still to play this weekend, while West Ham are up to eighth.

Elsewhere Pedro Neto's goal helped Wolves return to winning ways as they condemned Fulham to a fourth straight Premier League defeat and West Bromwich Albion are still waiting for their first top flight victory this term after goals from Moussa Djenepo and a wonderful Oriol Romeu volley saw them fall to a 2-0 defeat at Southampton.

Tweet
More in this category: « Sundowns appoints Mngqithi and Mokwena as joint Head Coaches. Jose Mourinho enjoyed a dream return to Old Trafford. »
back to top