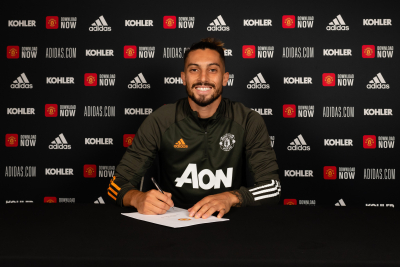 Manchester United have signed Brazil left-back Alex Telles on a four-year deal from Porto, with the option of a further year.

Telles scored 26 goals and made more than 50 assists for Porto after joining them from Galatasaray in 2016.

He said joining United, a club with "prestige", was a "huge honour".

"You have to work hard to get to this moment in your career and now I am coming to this club, I can promise that I will give everything in my heart to be a success here," he added.

"I won many trophies at FC Porto and I want to continue that at United. The manager has a clear plan and direction for this team and I can't wait to pull on the famous shirt."

Meanwhile Everton have signed defender Ben Godfrey from Norwich City in a deal worth an initial £25m, potentially rising to £30m.

Godfrey, 22, joins the Toffees on a five-year contract.

He is Everton's fifth signing of the summer after midfielders Allan and Abdoulaye Doucoure, playmaker James Rodriguez and left-back Niels Nkounkou.

"It is an honour to sign for Everton and to be part of a huge club," said the England Under-21 centre-back.

"This is a club full of history that has an exciting team full of world-class players who will help me kick on to the next level. I am looking forward to working with them and, hopefully, having great times with Everton."

Everton are the early Premier League leaders after winning their opening four matches.