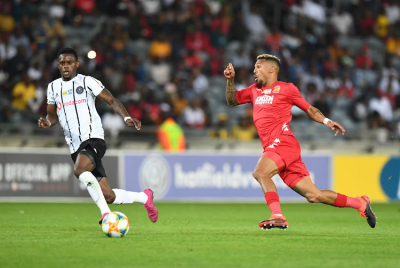 Orlando Pirates have confirmed the release of eight players ahead of the new DStv Premiership season, including midfielder Xola Mlambo.

The players have agreed on a mutual termination of their contracts after being told they were not in the plans of head coach Josef Zinnbauer.

The 29-year-old Mlambo spent the last two-and-a-half seasons at Pirates and was largely lauded for his performances, though he fell out of favour in the last campaign.

He should have no shortage of takers, having also turned out for BidVest Wits and Chippa United in the top-flight.

Bafana Bafana internationals Diamond Thopola and Tercious Malepe will also leave the club, along with Zambia national team star Augustine Mulenga, who is also now searching for a new club.

The decisions come after something of a mini squad overhaul, with Pirates having signed the Bidvest Wits trio of Thulani Hlatshwayo, Terrence Dzvukamanja and Deon Hotto, and Baroka FC midfielder Collins Makgaka.

Jooste had become available after Highlands Park sold their status last month to TS Galaxy and Pirates have subsequently pounced to secure the utility-man, who will add depth to the current squad.

"I am happy to have joined Orlando Pirates," he told the club's website. "This is an opportunity I look to grab with both hands.

"I know everybody says this is a dream come true but before I started playing professionally my father and I supported Orlando Pirates.

"Whenever we played against Pirates it felt special because I felt I was getting closer to my childhood dream. Today I find myself playing for the club that I not only support but a club that even my homeboy Daine Klate also played for."

The 28-year-old featured 17 times for the Lions of the North across all competitions as they finished ninth in the last-ever Absa Premiership campaign.

Tweet
More in this category: « Auckland Classic cancelled due to coronavirus pandemic. Alleged match-fixing in women's doubles,Thiem beaten by Schwartzman,Svitolina suffers shock defeat. »
back to top