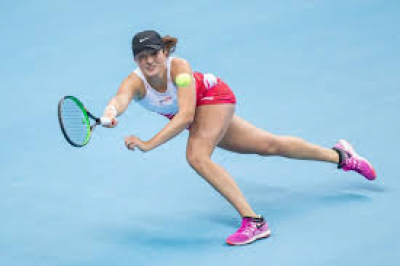 Polish teenager Iga Swiatek is a step away from a remarkable first Grand Slam after brushing aside Nadia Podoroska 6-2 6-1 in her French Open semi-final.

The 19-year-old needed only 70 minutes to beat the Argentine, who also was a first-time major semi-finalist.

Swiatek, whose devastating forehand did much damage, never relinquished control after breaking the world number 131's opening service games in both sets.

The Pole will now play either Sofia Kenin or Petra Kvitova in the final.

Whoever the world number 54 faces will have to have a good defence against a forehand which at times reached 80mph-plus against Podoroska. The teenager produced 11 groundstroke winners on that side, out of a total of 22.

Podoroska, the first qualifier in the Open era to reach the French Open women's semi-final, also has a strong forehand side but was never given a chance to get into her rhythm.

The 23-year-old's only bright moment came in the fifth game of the second set when she broke the Pole, although she needed four bites at it. Swiatek broke back straight away before serving out for victory at a cold and breezy Philippe Chatrier.

Defeat ends the remarkable run of world No131 Podoroska, the lowest-ranked player to reach the semi-finals in Paris in the Open era.