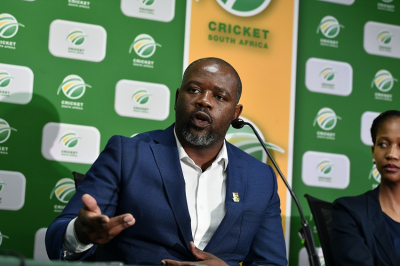 Cricket South Africa (CSA) is expected to hand over nearly 500 pages of the full Fundudzi report to parliament by close of business on Friday.

The report has been a major issue for CSA in recent weeks, and especially since the South African Sports Confederation and Olympics Committee's (Sascoc) involvement in the affairs of the organisation began a month ago.

Sascoc, and by extension the Department of Sport through minister Nathi Mthethwa, are demanding to see the Fundudzi report in its entirety and CSA has been given a deadline by the close of business on Friday to hand over the report in full.

The Fundudzi report was commissioned after the organisation reached crisis point in December 2019 under the leadership of former CEO Thabang Moroe.

It was tasked with interrogating the leadership at CSA dating all the way back to 2016 in an independent effort to unpack exactly how the organisation had reached the new lows it found at the end of 2019.

Moroe was suspended in December and it would be over nine months before he was officially dismissed, based off the findings in the Fundudzi report that were eventually handed over to CSA's audit and risk committee on July 31.

In a summary of the report, which has now been made public, Moroe is heavily implicated in a range of alleged misdemeanours.

He is not the only one, though, and even acting CSA president Beresford Williams is involved in what Fundudzi says was a conflict of interest over a loan that was paid from CSA to the Western Province Cricket Association.

Former CSA chief operating officer Naasei Appiah and former finance committee chairperson Iqbal Khan also feature throughout the report, and it has left government wanting to scrutinise the findings in their entirety.

CSA has, up until now and on the advice of Bowmans Attorneys, resisted showing the full report to anyone for fear of how that might impact any future legal disputes with anyone involved.

Tweet
More in this category: « Sofia Kenin to face teenager Swiatek in Roland Garros final. CSA announces franchise and provincial fixtures for 2020/21 Season. »
back to top