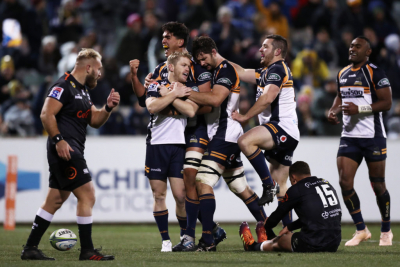 The Sharks held out against a Lions comeback to claim a 19-16 victory in the Super Rugby Unlocked opener in Durban on Friday night.

The first official game of South Africa’s domestic restart may not have been a high-scoring affair, but it was a thriller that went down to the wire.

As expected the opposing flyhalves, Elton Jantjies and Curwin Bosch, took centre stage, trading penalties to leave the match three points in the Sharks’ favour as play progressed after the full-time hooter.

Just a couple of minutes earlier into the match, Jantjies had an opportunity to draw the scores level, but he hit the poles with a late penalty attempt.

The Lions still had an opportunity to snatch it as they won a penalty near the Sharks’ tryline, with Jantjies this time opting for a scrum over a potential penalty kick, which would have seen the visitors come away with a credible draw. As it happened, referee AJ Jacobs blew for a penalty in the Sharks’ favour, allowing them to come away with the win.

The home side very much had the better of the first half, dominating over 80 percent of possession at a stage, but very much lost their way in the second period. A malfunctioning set piece and a high penalty count at the breakdown allowed the Lions to claw their way back into the contest.

As expected, Jantjies was at the fore of everything good that the Lions did on attack. His quick thinking led to their first try as he took a penalty quickly and cross kicked to allow Jamba Ulengo to score in the corner, which got them back in the game.

The Sharks will have a bye next weekend, while the Lions will travel to Cape Town to take on the Stormers, in what will be the Cape side’s opening match of the tournament.