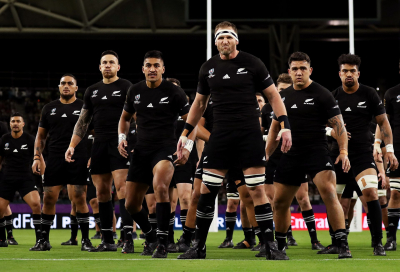 Jordie Barrett's 79th-minute penalty salvaged a 16-16 draw for New Zealand against Australia in the first international Test match since March.

The Wallabies were chasing a first victory in New Zealand for 19 years.

The game was the first international Test match since the Covid-19 restrictions, and the first for new All Blacks coach Ian Foster and his Wallabies counterpart Dave Rennie.

The second of four Bledisloe Cup games is on Sunday, 18 October.

The game was played in front of a near-capacity 31,000 mask-free spectators in Wellington, with New Zealand having largely contained the virus.

Wallabies replacement Reece Hodge had the opportunity to win the game in the second of nine overtime-minutes, but his 50m penalty struck the post.

The game ran on for a further seven minutes of continuous play as both sides looked for the win before Australia fly-half James O'Connor decided to end the contest with a kick to touch.

O'Connor had nudged the visitors three points in front with a 74th-minute penalty.

It was a story of two halves as the All Backs should have been 15-3 up in the first half but Rieko Ioane could not add to Barrett's opening try as he dropped the ball while attempting to ground it over the Australian line.

Aaron Smith went over to extend the hosts' lead four minutes after the restart, before tries from Marika Koroibete and Filipo Daugunu brought the Wallabies back into the match.

Tweet
More in this category: « Patrice Motsepe to buy shares of Egyptian club – Report. Bafana Bafana looking for a win against Zambia. »
back to top