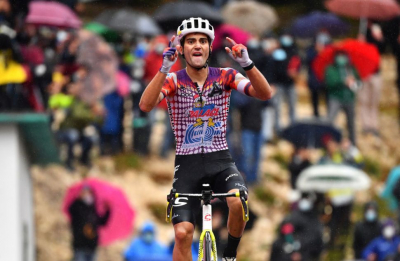 Almeida faltered on the final 9.6km climb in the mountainous stage in Abruzzo, but holds a 30-second overall lead for the race leader's pink jersey.

Guerreiro, 26, claimed his first stage win after a tight battle in the rain against Spain's Jonathan Castroviejo.

Monday is the first rest day in the 21-stage race, which ends on 25 October.

It was the second stage win for Education First at this year's Giro after Ecuador's Jonathan Caicedo won last Monday on the summit at Mount Etna.

Guerreiro is the first Portuguese rider to win a stage on the Giro d'Italia since Acacio da Silva in 1989.

He pulled away from fellow breakaway rider Castroviejo in the last 300 metres of the final climb.

Tuesday's 10th stage will be a 177km mountain trek between Lanciano and Tortoreto.