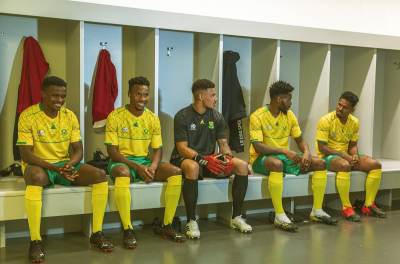 Bafana Bafana suffered a 2-1 defeat to Zambia in an international friendly on Sunday afternoon.

Substitutes Kelvin Kapamba and Chaniza Zulu grabbed the equaliser and the winning goal for Chipolopolo respectively after Keagan Dolly had given Bafana the lead early on in the second half.

Bafana were forced to make an early substitution following a nasty injury to Lyle Foster who was stretchered off the field with a neck injury.

Percy Tau tried a snap shot in the 33rd minute, but his shot was parried away for a corner kick by Zambian goalkeeper Evans Mwange.

Chipolopolo cut open the South Africans minutes before halftime when Lubambo Musonda cracked the foot of the post after a low shot from the right.

Thabiso Kutumela wasted a glorious opportunity to put Bafana in the lead few minutes later when he found himself on a one-on-one situation with Mwange, but the Zambian keeper came up tops again.

Dolly finally broke the deadlock and put South Africa in the lead in the 66th minute when he pounced on a Tau through pass, went passed the goalkeeper and slotted the ball into an empty net.

Bafana’s lead lasted for just 12 minutes as substitute Kelvin Kampamba grabbed the equaliser with a powerful low shot from outside the 18 area.

Another Zambian substitute Chaniza Zulu was to break Bafana’s hearts in the 82nd minute when he pounced on a loose ball inside the box smashed the ball home.