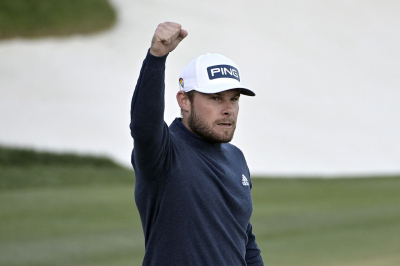 The 28-year-old world number 15 from Buckinghamshire was three ahead overnight and shot a five-under 67 for a 19-under total on the West Course.

Victor Perez of France challenged but eventually finished second after a 68.

Andy Sullivan's 65 put him joint third with Patrick Reed, with Tommy Fleetwood tied 13th at nine under after a 73.

The victory will see Hatton break into the world's top 10 for the first time when the rankings are updated on Monday, two days before his 29th birthday.

"This was a goal of mine to win this tournament and part of me is sad I didn't get to experience the crowds, but it's just amazing to win this trophy," said Hatton, who attended the tournament as a child with his father.