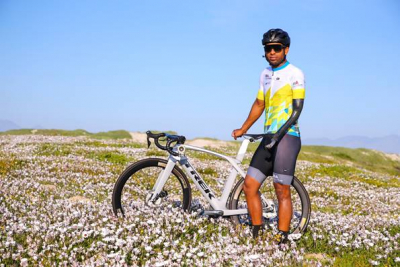 Since then he has won 12 gold medals in the South African & Western Cape track, time trial and road cycling championships, finished eighth in the Manchester Para Internationals and was the first disabled athlete to finish sub-three hours in the 2019 Cape Town Cycle Tour.

The Western Cape Government has recognised his achievements, naming him 2019 Sports Newcomer of the Year and his employer, DirectAxis, appointed him as its brand ambassador.

Although he’s always been into fitness, Reyaan, from Elfindale, had never been interested in cycling until the accident that cost him his left arm.

With typical understatement he explains what happened.

“About two years ago, a friend and I decided to go for a bicycle ride that turned into a bit of a challenge and I suppose my competitive nature took over.”

It’s the same unwillingness to let the loss of an arm limit him that led him to accept a rope-climb challenge at his local gym. He excelled at that too.

Married, with three children, Reyaan doesn’t consider himself a role model or even an especially gifted athlete but does share his story when asked to do so because he thinks it might help other people see past immediate crises and work towards opportunities that could lie ahead.

“For someone like me who’s always been into physical fitness, losing an arm was a very big deal, but ultimately it didn’t change who I am. I was fortunate to find a new way to channel my focus and I’ve worked hard to do my best at it. That’s all.”

It’s this matter-of-fact, down-to-earth attitude that resulted in DirectAxis naming Reyaan a brand ambassador and supporting his cycling ambitions, which include competing in the Paralympics.

“We’d like to think that what we do as a business is help people turn potential into opportunity and Reyaan exemplifies that,” says Shafeeqah Isaacs, DirectAxis’ head of sponsorship.

The sponsorship has meant that Reyaan was able to get a new bike which has been specially adapted to enable him to change gears and brake safely using just one hand.

“I’m lucky to get the support to be able to pursue my goals. There are so many talented people in South Africa who don’t and as a country we need to fix that.”

Tweet
More in this category: « Steve Komphela confirms his move to Mamelodi Sundowns. Pulev confirms bout with world heavyweight champion Joshua on 12 December. »
back to top