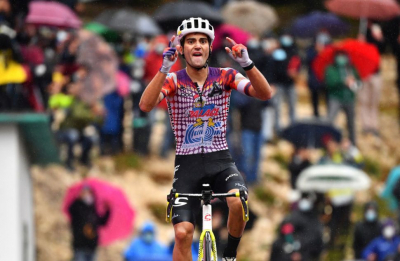 The Mitchelton-Scott team and title contender Steven Kruijswijk have withdrawn from the Giro d'Italia after the latest round of Covid-19 testing.

"As a social responsibility we've made the decision to withdraw," said Mitchelton-Scott boss Brent Copeland.

Kruijswijk, ruled out of last month's Tour de France because of a shoulder injury, said: "Within the team we take a lot of measures to avoid contamination.

"And I just feel fit. I can't believe I got it. It is a very big disappointment to get this news. It is a pity that I have to leave the Giro this way."

In a statement on their website, Team Sunweb said: "Michael is currently asymptomatic, feels healthy and is now in quarantine."

The latest rounds of tests were carried out on 11 and 12 October.

The Grand Tour race, originally scheduled for May, finishes on 25 October.

Tweet
More in this category: « Pulev confirms bout with world heavyweight champion Joshua on 12 December. AmaZulu FC evoke the “Rebirth of the Warrior” with 2020/21 kit. »
back to top