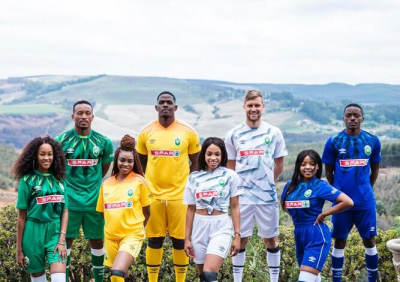 AmaZulu Football Club (F.C) are evoking the "Rebirth of the Warrior" with the new official Umbro kit for the DSTV Premier Soccer League season.

Officially unveiled at The Zunguness in the KZN Midlands on 12 October 2020, the new home and away jerseys are inspired by a Zulu spear print design that pays homage to the Zulu warriors of Isandlwana and the fighting spirit of AmaZulu F.C.

In the battle of Isandlwana, Zulu warriors armed with spears defeated the invading British army who were armed with superior weapons.

The bold emerald green home jersey features Zulu spears cascading downwards from the neck of the jersey capturing the essence of the modern-day warrior on the football field.

Designed to be the new armor of Usuthu players for the new season, the jerseys are also constructed from innovative lightweight materials to provide players with ultimate athletic mobility.

"The historical reference that has inspired this kit is relevant to the mantra of Usuthu. The club has players who are warriors and who fight till the very end,"says new AmaZulu President and owner Sandile Zungu.

"AmaZulu payers don’t play until the 88 th minute when there is still 2 minutes plus injury time. They play and fight till the final whistle no matter what the score is."

For us to achieve the objectives we have set for ourselves such as owning the next decade when it comes to domestic football and being one of the biggest football brands in the continent when we celebrate our centenary as a club, will require us to be warriors both on and off the field,"adds Zungu.

In thanking long-time headline sponsor, the Spar Group, Zungu acknowledged that the over 20-year partnership and relationship has been pivotal in the success of AmaZulu.

"Our partnership with the Spar Group is one of the oldest in the league. Spar’s commitment has never shaken, and they have continued to be with Usuthu even in the most challenging times. They truly embodied the spirit of being warriors."

The new AmaZulu jersey continues the tradition of a bold designs with cultural references that appeal to both the young and old Usuthu supporters.

AmaZulu and all supporters of the beautiful game can purchase their replica jerseys online by visiting www.amazulufc.net.