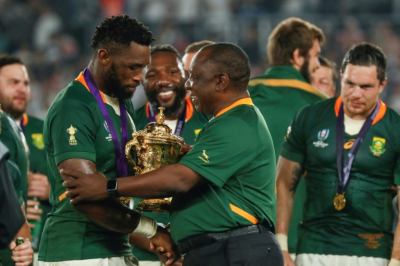 SA Rugby have announced that they have reluctantly been forced to withdraw the Springboks from this year’s Rugby Championship.

Due to the on-gong complications related to the Covid-19 pandemic and concerns about seriously jeopardising player welfare, SA Rugby said it is impossible to commit to SANZAAR that the Springboks would be able to compete.

South Africa’s withdrawal means they will not defend their title as Rugby Championship winners and the tournament will now revert to its former Tri-Nations format with Australia, New Zealand and Argentina the participating nations.

SANZAAR chief executive Andy Marinos said: "Naturally, it is extremely disappointing that the Springboks, due to the continued complexities of operating in and around this COVID environment, cannot fully compete in the previously planned six-round Rugby Championship."

South Africa are due to host the British and Irish Lions next year and might have been without Test rugby for 20 months by the time that series starts, unless new matches can be scheduled.

South Africa's provincial Curry Cup competition only began on October 10 because of the delays brought on because of the coronavirus, leaving Springboks players with little match play before the Championship.

At most, players would have had three domestic games before the scheduled departure for Australia and, for most, two of those would have been informal or exhibition matches.

The Springboks' withdrawal will cut the Rugby Championship from 12 to six matches, all to be played in Australia, but it will still go ahead over a six-week period, with each team having at least two byes.

The Argentina squad are already in Australia preparing for the tournament, their preparation at home having been set back by a Covid-19 outbreak which affected at least 10 players and the head coach.

Tweet
More in this category: « South Africa withdraw from the Rugby Championship. Matchday 4 Preview:Bundesliga football returns with all 18 teams in action this coming weekend. »
back to top