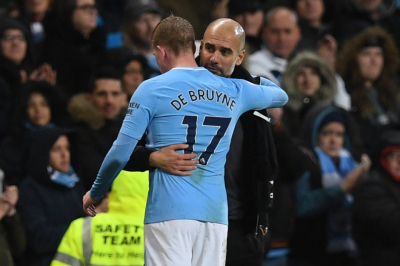 The Belgium midfielder, 29, was substituted in his country's Nations League match against England on Sunday.

Belgium manager Roberto Martinez said the move was a "precaution", but City boss Pep Guardiola said he is not available.

"I don't think it is serious, but the next games I think he will be out. We will see," he said.

De Bruyne returned to City after leaving the Belgium squad before their game against Iceland on Wednesday.

City are 14th in the Premier League table with four points from their first three games.

There has been better news for Guardiola on the injury front this week, with the return of Sergio Aguero from a long-term knee injury.

The 32-year-old Argentina striker suffered the injury against Burnley on 22 June, missing City's Premier League, FA Cup and Champions League run-in, as well as their opening fixtures this season.

Brazil striker Gabriel Jesus is still out after he was injured in City's win at Wolves on 21 September.

Tweet
More in this category: « Valentino Rossi out of action after Covid-19 positive test. Tottenham complete signing of Swansea defender,Joe Rodon. »
back to top