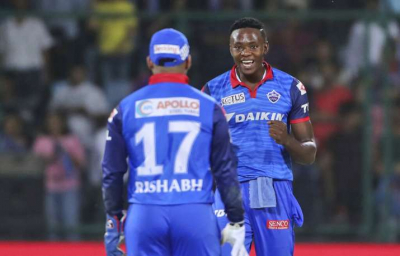 The Delhi Capitals bowler who has now picked up a wicket in 23 successive IPL matches, got to the landmark in his 27th match in the tournament on Saturday in Sharjah.

Rabada got to the 50-wicket mark when he got the big wicket of his South Africa teammate Faf du Plessis for 58 in his second spell against Chennai Super Kings. Rabada finished with figures of 33 for 1 in 4 overs as CSK finished with 179 in 20 overs.

He has broken Sunil Narine's record as the West Indies and Kolkata Knight Riders spinner had set the record achieving the landmark in 32 matches. Lasith Malinga is the third-fastest man to get to 50 wickets as he had gotten there in 33 matches. Imran Tahir (35) and Mitchell McCleneghan (36) complete the top 5 of the elite list.

Rabada made his IPL debut in 2017 and picked up just 6 wickets in as matches. After missing the IPL 2018 season, the South Africa pace spearhead set the stage on fire in IPL 2019 as he picked up 25 wickets last season for the Delhi Capitals -- one less than Purple Cap winner Imran Tahir.