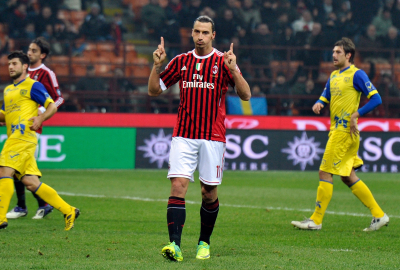 Ibrahimovic tapped in to open the scoring after Samir Handanovic saved his penalty and made it two moments later from Rafael Leao's smart cross.

Romelu Lukaku pulled one back for Inter before the half-hour mark and was denied a penalty in the second half.

AC Milan held on to make it four wins from four and stay top of the table.

Some 1,000 fans were allowed inside the San Siro as Ibrahimovic made his return to the AC Milan side after a period of isolation following his positive Covid-19 test.

The former Sweden forward immediately picked up where he left off in September, taking his tally to four goals in two Serie A games.

He won a penalty after 13 minutes and was alert to finish on the rebound after Handanovic saved his first attempt, steering in a second soon after.

Lukaku then turned home Ivan Perisic's low delivery and almost levelled before the break when his header dropped narrowly wide from a corner.

The Belgian also saw a penalty decision overruled by the video assistant referee after he was seemingly brought down by goalkeeper Gianluigi Donnarumma.

Lukaku's first-half strike was the first goal AC Milan have conceded in the league this season and they continue to be Italy's form team, despite not having won a major trophy since 2011.

Stefano Pioli's side are now unbeaten in 20 games in all competitions, having finished last season with nine wins and three draws in their final 12 matches.