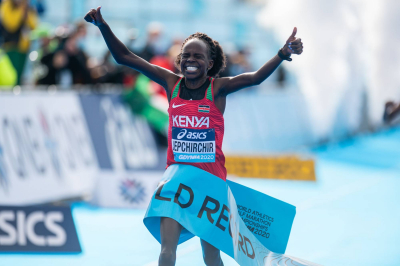 Kenya's Peres Jepchirchir sets a world record in the women's half marathon during the 2020 IAAF World Half Marathon Championships on Saturday in Gdynia, Poland.Photo Credit:AFP.

Kenya's Peres Jepchirchir has broken her own world record for a women-only half marathon.

The 27-year-old ran one hour five minutes 16 seconds at the World Half Marathon Championships in Gdynia, Poland.

Germany's Melat Yisak Kejeta was second in 1:05:18 with Ethiopia's Yalemzerf Yehualaw in third with 1:05:19.

"My goal was to win this race. I did not expect that I would beat the world record, but I realized that it could happen when we passed 20 kilometers.

"It was a little bit windy, but the course was good for me."

In the men's race, Uganda's Jacob Kiplimo claimed victory in a championship record time of 58:49.

In the women's race, the top three all ran under Jepchirchir's previous would record of 1:05:34.

The leading group went through 10km in 30:47, while the chances of Ethiopia's Ababel Yeshaneh and Kenya's Joyciline Jepkosgei suffered when they fell on the third lap as they went on to finish fifth and sixth respectively.