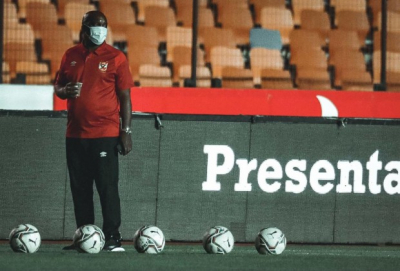 Al Ahly have defeated Wydad Athletic Club 2-0 in the first leg of the CAF Champions League semi-finals on Saturday.

The Reds started the game with a bang and scored after just five of play through Mohamed Magdy Afsha.

In the 39th minute, Wydad forward Gbagbo Junior Magbi was fouled and brought down in Al Ahly’s box by Mohamed El-Shennawy giving the referee no choice but to award a penalty after consulting VAR.

Badie Aouk stepped up to take the penalty but his effort was parried away and the rebound was calmly collected by El-Shenawy in a heroic double save.

Hussein El-Shahat had a great opportunity to double Al Ahly’s advantage in the 57th minute of the game but his finish was saved by Wydad goalkeeper Ahmed Reda Tagnaouti.

Three minutes later, Al Ahly were awarded a penalty as Junior Ajayi’s shot hit an arm of one of the defenders inside the box. Veteran fullback, Ali Maaloul, converted successfully from the spot to double his side’s lead.

With this victory, Al Ahly have put themselves in a comfortable position ahead of the second leg of the semi-finals.

They host Wydad in the second leg of the semi-finals in Cairo next Friday.

Zwane has played an integral role in Sundowns’ front line in the last six years having won multiple league titles and a CAF Champions League title in 2016.

The 31-year-old was rumoured to leave Sundowns and reunite with former head coach, Pitso Mosimane, at Al Ahly.

Tweet
More in this category: « Peres Jepchirchir sets new record at world half marathons. Rory McIlroy seven shots off leader Russell Henley after 66 in Vegas. »
back to top