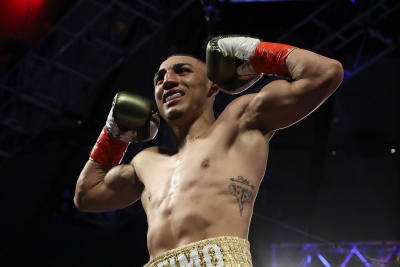 The American's win over the Ukrainian means he now adds the WBA, WBO and WBC 'Franchise' titles to his IBF belt.

"I am ready to take over the world," Lopez said.

The result means he is the youngest fighter to become a four-belt undisputed champion and he maintains his unbeaten record with 16 wins from 16 bouts.

The fight between the two rivals had been eagerly awaited but took place without any fans because of the coronavirus pandemic.

Lomachenko, 32, was kept quiet early on and, although he put in a strong effort in the later rounds, it was not enough to stop him suffering a second defeat from his 15 fights.

"I think I won the fight," Lomachenko said after his first loss in six years. "But I am not going to argue it now.

"In the first half of the fight he won more rounds. In the second half I took it over. I don't agree with the scorecards."

Lopez became the first fighter in the four-belt era to become an undisputed champion at lightweight. With his body still growing, he wasn't sure after the fight exactly where he might go next. "Take me to 140 or I could go fight Devin Haney if they want that," Lopez said.

Tweet
More in this category: « Rory McIlroy seven shots off leader Russell Henley after 66 in Vegas. Totenham Hotspurs,West Ham play to thrlling draw. »
back to top