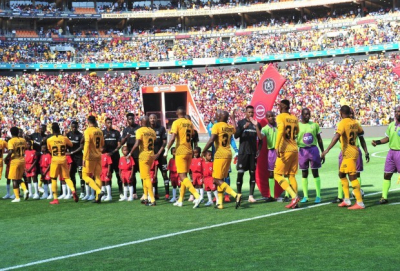 Mamelodi Sundowns 2020-21 season got off to a nightmare start when they were beaten 1-0 by Bloemfontein Celtic in the last MTN8 quarterfinal.

After a goalless opening 45 minutes, the second half almost saw a goal soon after the restart when Peter Shalulile ran onto a ball over the top of the Celtic defence but saw his low effort blocked by the legs of Jackson Mabokgwane.

It seemed only a matter of time until ‘Downs claimed the lead, but instead it was Phunya Sele Sele who made the breakthrough on 69 minutes. A fine free kick delivery from the left flank picked out Victor Letsoalo, who guided a header back across to the far corner to put Celtic 1-0 up.

Even a late, desperate triple substitution which saw Andile Jali, Keletso Makgalwa and Sphelele Mkhulise thrown on by the Brazilians’ coaching team was not enough to force an equaliser, ensuring a surprise win for the team in green and white.

Meanwhile Kaizer Chiefs secured a hard-fought 2-1 victory over Maritzburg United in the 2020 MTN8 quarterfinal match at the FNB Stadium in Soweto.

The win sees Amakhosi, who are record 15-time MTN8 winners, join SuperSport United and Orlando Pirates in the semifinals.

The visitors broke the deadlock five minutes after the half-hour mark when the Amakhosi backline was exposed by Keagan Buchanan's defence-splitting pass to Kutumela.

The new Bafana Bafana international made no mistake as he beat Khune with a low effort to make it 1-0 to Maritzburg.

Maritzburg were deservedly leading 1-0 at the interval.

However Chiefs did get the goal they had been looking for in the 73rd minute when Yagan Sasman scored from close range following a corner-kick from Khama Billiat to make it 1-1.

Ultimately, Sasman's late brace was enough to earn Chiefs a hard-fought 2-1 victory over Maritzburg on the day.

The Soweto giants will now headline the next round while defending champions SuperSport United will lock horns with Bloemfontein Celtic, who defeated Mamelodi Sundowns.