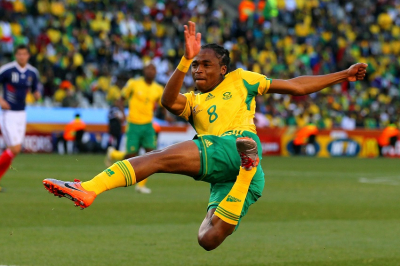 Amazulu have unveiled their new signings for the upcoming Premier Soccer League season, with Siphiwe Tshabalala and Luvuyo Memela among the big names.

The KwaZulu-Natal outfit have also added ex-Orlando Pirates star Augustine Mulenga, while his former teammate Xola Mlambo is another new arrival to an increasingly strong roster.

36-year-old Tshabalala is the stand-out arrival, and arrives at AmaZulu following a storied career both domestically and in Europe.

He’s been without a club since ending a brief spell at Turkish side BB Erzurumspor, and his trophy-winning experience—he was twice a PSL champion with Chiefs—represents a boost to his new employers.

Sandile Zungu's recent takeover of the historic club has created an immediate shake-up as they look to challenge the big three in an ambitious new project with head coach Ayanda Dlamini.

Zungu confirmed again in today's official unveiling that a top-four target in the 2020/21 DStv Premiership is being set as well as the hope of silverware as they look to end their 28-year trophy drought.

AmaZulu ended the 2019-20 PSL season in 13th place, only evading the bottom two places by one spot.