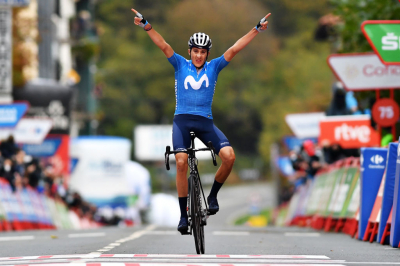 Froome, 35, fell back from the peloton with 41km to go of the hilly 152km stage from Pamplona to Lukenberri.

Primoz Roglic of Jumbo-Visma retained the leader's red jersey after as he finished among his rivals, 19 seconds behind Movistar rider Soler.

Soler broke away from the main group on the descent to Lukenberri, near the Spanish-French border, with 14km to go following the climb up the category one Alto de San Miguel de Aralar.

As the leaders chased Soler, a group of five small Asturcon wild horses, local to the northern Spanish Basque region, burst out of road side-trees and into the group containing Roglic, Ireland's Dan Martin of Israel Start Up Nation and other contenders.

Miraculously, no one was knocked off their bike as riders took evasive action, but it helped Soler maintain his slender advantage.

Roglic leads the general classification by nine seconds over Martin, with Ineos' Richard Carapaz 11 seconds down in third and Britain's Hugh Carthy of EF Pro Cycling 20 seconds further back in seventh.

Tweet
More in this category: « Jerling and Albertse share lead at Wild Coast. England's white-ball tour of South Africa to go ahead in November. »
back to top