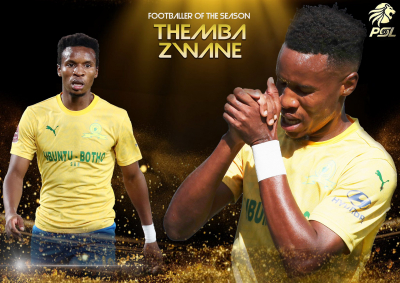 This was Zwane’s second successive nomination for the PSL Footballer of the Season. This year, he beat teammates Gaston Sirino, Peter Shalulile and Kaizer Chiefs' Samir Nurkovic.

Pitso Mosimane, the former Mamelodi Sundowns coach, took the Absa Premiership Coach of the Season for a record third time in a row.

Mosimane guided Sundowns to yet another Absa Premiership title in September. This was the Brazilians’ third consecutive trophy.

Baroka FC’s Goodman Mosele took the Absa Premiership Most Promising Player award in a category that was highly contested by some of the country’s most promising talent. This accolade is awarded to players under the age of 21.

Maritzburg United’s Rushine De Reuck, another youngster who is making a name for himself, was voted Absa Premiership Defender of the Season.

Hlompho Kekana’s strike against Orlando Pirates on 20 August 2020 was voted by the public as the Absa Premiership Goal of the Season.

Despite losing to Mamelodi Sundowns in the Nedbank Cup final, Bloemfontein Celtic’s Victor Letsoalo took top honours in the competition. He was voted as the Nedbank Cup Player of the Tournament.

Keletso Makgalwa, the Mamelodi Sundowns forward, walked away with the Nedbank Cup Most Promising Player.

Tweet
More in this category: « Aubameyang scores the winner as Arsenal win their Europa League Group B opener. Spurs cruise to opening Europa League victory. »
back to top