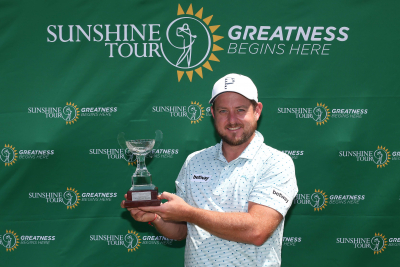 Merrick Bremner battled some of the toughest conditions he's ever experienced on a golf course to win the Sunshine Tour's Sun Wild Coast Sun Challenge by a single shot at the Wild Coast Sun Country Club on Friday.

Bremner closed with an incredible round of 64 to win on eight-under-par 202. Keenan Davidse and Jacques Blaauw took second place on seven under, each with final rounds of 68. Keith Horne also signed for a 68 to finish fourth on six under par.

In very difficult conditions typical of the Wild Coast Sun course, Bremner did exceptionally well to not make a single bogey in his final round as he claimed his seventh victory on the Sunshine Tour.

But as easy as he may have made it look, Bremner gave some perspective to the conditions they were faced with.

"It really started gusting quite hard towards the last 30 minutes of the round. It was brutal. I can't explain it. If you mishit it just slightly, the ball just went nowhere. There were crosswinds that just accentuate any mistake you make. You had to be on top of your game and hit quality shots to make a score."

The Sunshine Tour travels to the iconic Gary Player Country Club this coming week for the Investec Royal Swazi Open.

Tweet
More in this category: « Bundesliga season is centred around ‘Mother of all Derbies’ Dortmund host arch-rivals FC Schalke 04. CSA confirms that no resignations of board members have taken place. »
back to top