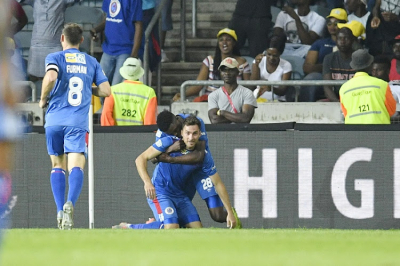 SuperSport United secured a 2-0 win over Black Leopards in the DStv Premiership match at the Lucas Moripe Stadium.

United dominated the match after it resumed and Grobler was working hard in attack for the home side as he searched for the opening goal.

The newly crowned MTN8 Last Man Standing did get the goal he had been looking for five minutes before the half-hour mark.

Grobler beat Guinea-Bissau international Mendes with a composed finish to make to 1-0 to SuperSport with Jamie Webber grabbing an assist.

The hosts suffered a blow on the hour-mark when Onismor Bhasera received his second yellow card and SuperSport were reduced to 10 players.

However, Matsatsantsa continued to attack and they were awarded a free-kick in a promising area in the final 15 minutes of the match.

Teboho Mokoena forced Mendes into a good save at the near-posts as Kaitano Tembo's charges looked to snatch a late winning goal.

However, the visitors were left vulnerable at the back and they were punished by Grobler, who netted with a powerful shot from range to seal SuperSport's 2-0 win on the night.

Meanwhile AmaZulu FC and Orlando Pirates played to a 1-1 draw in the DStv Premiership match at the Jonsson Kings Park Stadium on Saturday night.

The result sees Usuthu and the Buccaneers begin their 2020/21 league campaigns with a draw.

However, Pirates were awarded a penalty after Sibusiso Mabiliso was adjudged to have fouled Siphesihle Ndlovu in the box.

Frank Mhango then stepped up and beat AmaZulu goalkeeper Siyabonga Mbatha from the spot-kick to make it 1-0 to Pirates 18 minutes into the game.

Usuthu continued to attack and they were also awarded a penalty after Luvuyo Memela was fouled by his former Pirates teammate Fortune Makaringe in the box.

Pirates keeper Wayne Sandilands denied Lehlohonolo Majoro from the spot-kick, but the AmaZulu striker fired home from the rebound to make it 1-1 in the 33rd minute.

Elsewhere Chippa United came back to hold Cape Town City to a 1-1 draw in the DStv Premiership match at the Cape Town Stadium on Saturday evening.

The draw saw the two teams start the new 2020/21 campaign with a draw in the Mother City.

The Chilli Boys were the better side in the opening stages of the match with Ramasimong Maloisane and Sizwe Mdlinzo combing well.

The towering shot-stopper gave away possession to Mduduzi Mdantsane, who made no mistake as he hit the back of the net to make it 1-0 to Chippa in the 22nd minute.

The visitors deservedly level matters in the 53rd minute when Augustine Chidi Kwem beat his marker, before firing past Leeuwenburgh at the near-post to make it 1-1.

Tweet
More in this category: « Jota helps Liverpool return to winning ways. Acting CSA president Beresford Williams,5 other board members step down. »
back to top