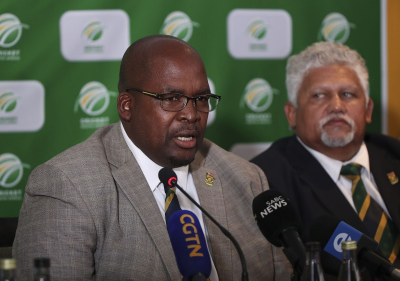 Cricket South Africa has confirmed on Sunday that acting president Beresford Williams has handed in his resignation with immediate effect.

CSA confirmed the departures of Williams, Angelo Carolissen, Tebogo Siko, John Mogodi and Donovan May, all members of the Members’ Council and the CSA board, in a string of Tweets, while thanking them for their services.

Acting President of CSA Beresford Williams has handed in his resignation with immediate effect. Mr Williams said that he is deeply passionate about cricket and because of his love for the game, he has resigned as this is the best way he can currently serve cricket.

This comes after reports earlier this week that the whole CSA board would be dissolved by the Members Council, following a resolution that was taken at a meeting on Thursday that the board would step down after pressures from the Minister of Sport Nathi Mthethwa.

As mentioned in Friday's press statement, the CSA Board met this week & discussed various strategies that would best position CSA. One of these approaches was that if the Board would need to step down for the best interest of CSA & cricket as a whole, the Board would then do so. pic.twitter.com/0ZWPCymtpL

CSA has long been under the spotlight for the corporate mess of governance that has unfolded this year due to the infamous Fundudzi report that has implicated many of the board members, including Williams.

Mthethwa also wrote a letter to Williams two weeks ago to inform him of government plans to intervene at the organisation after failed dialogue between the Ministry of Sport and CSA.

In a final Tweet, CSA said they "understands and appreciates the Board members reasoning behind their resignations, based on their love for cricket and their respect of CSA."

Tweet
More in this category: « Bradley Grobler's brace guides United to a win over Black Leopards. Khabib Nurmagomedov among the greatest of all time. »
back to top