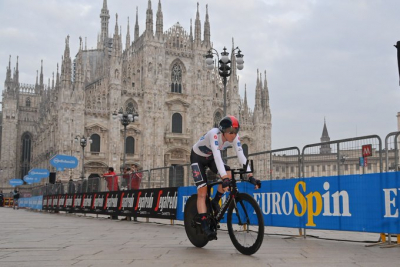 Tao Geoghegan Hart has become only the second British man to win the Giro d'Italia.

The 25-year-old, who won stage 20 on Saturday, was tied with Australian Jai Hindley before the final-day time trial, the first such instance in the race's history.

But Ineos Grenadiers' Geoghegan Hart finished 39 seconds ahead of Hindley in the 15.7km time trial in Milan.

Chris Froome is the only other British man to win the Giro, in 2018.

Geoghegan Hart is one of five British men - alongside Froome, Bradley Wiggins, Geraint Thomas and Simon Yates - to win a Grand Tour.