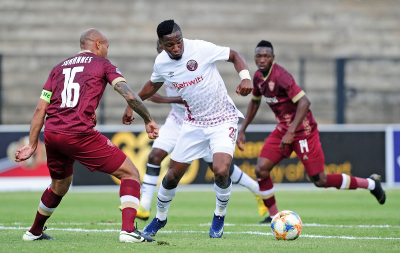 Swallows FC marked their return to the top-flight with a 1-1 draw away to Stellenbosch FC in a DStv Premiership clash at the newly revamped Danie Craven Stadium.

Gladafrica champions opened their goal-scoring account after 16 minutes when new signing Ruzaigh Gamildien converted from the spot after Lee Langeveldt was adjudged to have committed a foul inside the area.

Stellenbosch were awarded a penalty of their own soon after, following a coming together between Leletu Skelem and Virgil Vries. Robyn Johannes stepped up to the spot and drew the hosts level with 27 minutes on the clock.

Both teams will be in action on Wednesday evening with Swallows to host Bloemfontein Celtic at Dobsonville Stadium while Stellenbosch travel to Soweto to take on Orlando Pirates.

This is how both teams lined-up:

Tweet
More in this category: « Toffees suffer first lost of the season. The SA National Short Course Swimming Championships - Day 02. »
back to top