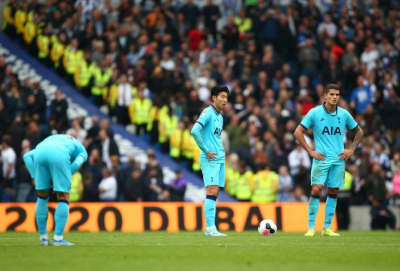 Tottenham slipped to a first away defeat since July after a mistake by Ben Davies helped Royal Antwerp leapfrog their Europa League opponents to go top of Group J.

Flat and uninspired, Spurs struggled to carve out chances and Jose Mourinho made four changes at the start of the second half in an attempt to inject some urgency into the side.

But it could have been worse for Tottenham, Mbokani somehow blazing over from three yards out before Harry Kane was sent on in an attempt to rescue the game.

Simen Juklerod also missed a fine chance after being sent clean through as Spurs failed to score for the first time since the opening weekend of the season.

Mourinho's side are three points behind Royal Antwerp in Group J after two games, level on points with LASK, who beat Ludogorets 4-3.

But the French side roared back with goals from Zeki Celik and Jonathan Ikone to stay unbeaten this season.

Celtic hung on amid heavy pressure for their first point in Group H.

AC Milan top the section after following up victory at Celtic Park with a 3-0 home win over Sparta Prague.