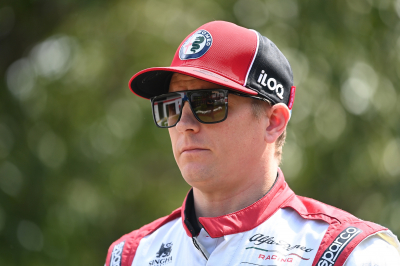 Kimi Raikkonen and Antonio Giovinazzi will remain at the Alfa Romeo team for the third consecutive year in 2021.

Raikkonen, who at 41 this year broke the record for number of Grand Prix starts, will be going into his 19th season in F1.

Giovinazzi did enough this season to convince Ferrari, who control one of the Alfa seats, to keep him in a drive. He is also Ferrari's reserve driver.

The announcement comes a day after Alfa Romeo confirmed its commercial deal to brand and back the Swiss-based team that started its life in F1 as Sauber in 1993.

Team boss Frederic Vasseur said: "I still see the passion and motivation in Kimi every time I see him at work.

"He can be trusted to deliver 100% of what the car can produce and he is a true leader for the people working around him.

"Antonio finished last year's campaign strongly and he picked up where he left off and kept improving throughout 2020.

"From the track to the engineering briefings, Antonio has played a crucial role for our team and he has thoroughly deserved a new contract for 2021. His work ethic, commitment to the team and contagious enthusiasm are a huge asset."

Alfa Romeo are eighth in the constructors' championship with five races to go this season and have spent much of 2020 battling towards the back of the field with Williams and Haas.