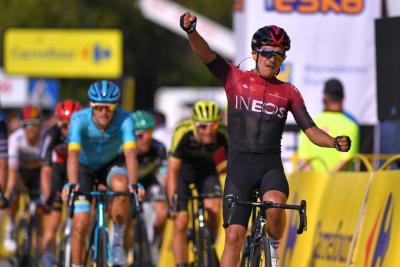 France's David Gaudu won Saturday's 11th stage of the Vuelta a Espana after the start was delayed following a protest led by Ineos Grenadiers.

It followed a decision by stewards on Friday that put Primoz Roglic back into the overall lead.

Groupama rider Gaudu pulled away from Spaniard Marc Soler of Movistar in the final metres of the 170km stage, which finished on the Alto de la Farrapona.

Roglic maintains his lead at the top of the standings.

The Jumbo-Visma rider is on the same time as Ineos' Richard Carapaz but has the red jersey on better stage placings so far.

Sunday's 12th stage will finish at the top of the challenging Angliru - a 12.4km ascent at 9.9% with the last seven kilometres averaging a gradient of 13% and featuring a section above 20%.

Saturday's start from Villaviciosa was delayed following the protest.

It meant Carapaz lost the overall lead, but Ineos were angry as the rules were changed after the stage.

The rules state that on stages expected to finish in a bunch sprint, time gaps are counted if there is a gap of three seconds or more between groups.

Tweet
More in this category: « Pirates claims bragging rights in the first Soweto derby of the season. Six Nations 2020 - England earn bonus point but must wait on France v Ireland. »
back to top