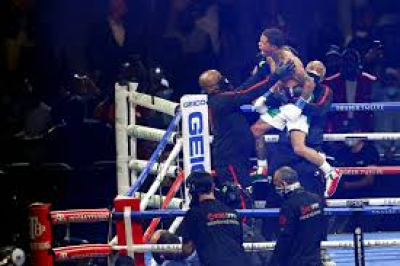 Davis, 25, whose own WBA lightweight title was also on the line, landed a left uppercut to leave Mexico's Santa Cruz, 32, on the canvas.

It was Davis' 24th win from 24 fights - and a first knockout for Santa Cruz.

"I'm going to continue to show people all over the world that I'm the best," American Davis said.

"I don't have to call anybody else out. I'm the top dog. Just line them up, and I'll knock them out one by one," he added.

About 10,000 fans were allowed into San Antonio's 72,000-capacity Alomodome Arena to watch the fight, with masks and social distancing rules in place.

Davis had vacated the WBA super world super-featherweight crown last year so he could move up to the lightweight ranks.

Santa Cruz, who was taken to the hospital for a check-up after the fight, had taken the title last November with a unanimous points victory over American Miguel Flores.