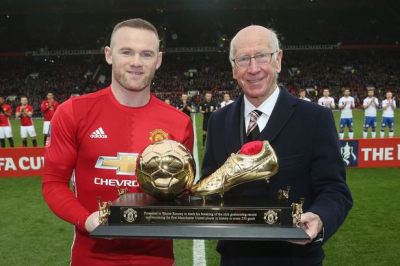 Sir Bobby Charlton, the England and Manchester United great, has been diagnosed with dementia.

The news was disclosed to The Telegraph on Sunday with the blessing of the World Cup winner's wife, Lady Norma Charlton.

Sir Bobby, 83, becomes the fifth player from England's 1966 World Cup-winning team to have been diagnosed with the neurological disease.

He finished his career with spells at Preston and Irish side Waterford.

Joining United in 1953, he scored 249 goals in 758 games for the club, long-standing records which were eventually broken by Wayne Rooney in 2017 and Ryan Giggs in 2008 respectively.

He remained England's record goal scorer until Rooney surpassed him against Switzerland in September 2015.

At the age of 20, Sir Bobby was a survivor of the Munich air crash of 1958 in which 23 people died, including eight of his Manchester United team-mates.

He inspired United to a first European Cup win in 1968, scoring twice in the final, and was awarded the Ballon d'Or in 1966 after playing every minute of England's World Cup victory.