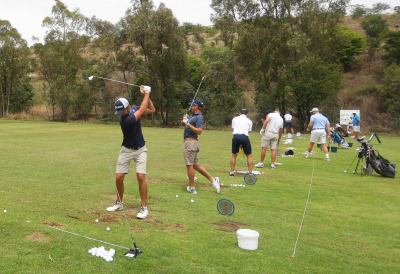 The 54-hole tournament offers a R700 000 purse for the Sunshine Tour professionals competing. But beyond that will be their desire to use this week as the final preparation for the upcoming three-week Summer Swing of the Joburg Open, Alfred Dunhill Championship and South African Open.

The good news for the rest of the field this week is that Daniel van Tonder has decided to take a week off.

Van Tonder has been the hottest golfer on the Tour since its restart in August, winning four of the last six tournaments. But he's decided to take this week off and prepare for a Summer Swing where he hopes to turn his current form into a maiden European Tour title.

"I'm just taking this week off from tournaments because I want to work on some things to make sure everything is ready to go for the three co-sanctioned tournaments. So I'm just putting in some work on my own to make sure I'm ready for those," he said

Van Tonder is certainly not alone in seeking to capitalise on the upcoming run of co-sanctioned tournaments on home fairways, which tees off on 19 November with the Joburg Open.

MJ Viljoen will feel confident about his own chances. Currently second on the money list behind Van Tonder, Viljoen hasn't finished worse than 35th in the last seven tournaments, including three top-10s. His seventh-place finish in last year's Alfred Dunhill Championship will also have convinced him he has what it takes to compete against European Tour fields.

Tweet
More in this category: « Shane Watson retires from all forms of cricket. Coetzee relishing Joburg Open return. »
back to top