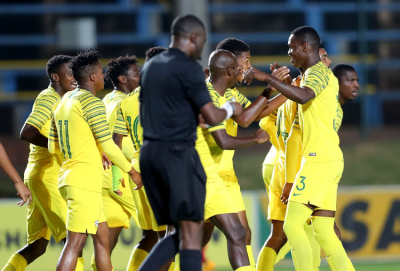 These matches are part of the u23s preparations leading up to next year’s rescheduled Tokyo Olympic Games.

Notoane’s charges, who qualified for the Tokyo Olympic Games after finishing third in last year’s U-23 AFCON tournament in Egypt, will assemble for camp on 7 November at Milpark, Gauteng before flying out to the Middle East on 10 November.

The two friendly matches will be played on 14 November and 16 November in Riyadh, Saudi Arabia, before the team flies back to South Africa the following day.

Notoane stated that he was pleased with the talent he had selected, adding that these friendly matches will grant him the opportunity to assess some of the new talent he has roped in for future selection.

“I am very happy that we can finally get our preparations for next year’s Olympic Games underway, after the team had been inactive for quite some time due to the Coronavirus pandemic,” Notoane said.

“We have roped in some new young talent and we would like to see how they will perform in the Under-23 level from junior national team ranks. Players like Njabulo Blom, Nkosingiphile Ngcobo and Sibusiso Mabiliso are players who have done extremely well in the National Under-20 set-up and are also part of first team football action in their respective clubs.”

“We truly believe that these two friendly matches will give us the information that we need, as we continue with the process of identifying the right talent to work with building up to next year’s Olympics.”

Meanwhile, Notoane stated that he was pleased to see players like Teboho Mokoena, Reeve Frosler and Luther Singh being called up into the Bafana Bafana squad for their upcoming 2021 AFCON qualifier encounters against Sao Tome.

Notoane added that seeing players graduate from junior, right up to the senior national team ranks was something he was deeply proud of. The coach also added that such synergy between South Africa’s National teams can only bode well in benefiting the country’s football in the long run.

“I am happy to see players like Reeve Frosler, Teboho Mokoena and Luther Singh being roped into the senior national team,” Notoane said.

“They were a part of our Under-23 players which were called upon for assessment in Bafana Bafana’s two friendly matches against both Namibia and Zambia leading up to these two AFCON qualifiers. I am glad that coach Molefi Ntseki saw something in them, following his decision to bring them in to form part of his final AFCON qualifier squad. Such synergy could only go on to benefit the country’s football in the long run.”

Tweet
More in this category: « Arteta calls for introduction of the video assistant referee in Europa League. Matchday 7 Preview Bundesliga:Lewandowski, Haaland go head-to-head in Bayern, Dortmund clash. »
back to top