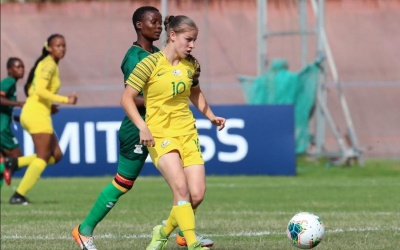 Bantwana responded to their opening defeat to Zambia with a 7-0 resounding win over Zimbabwe in the COSAFA Cup tournament on Friday afternoon.

From the first whistle Simphiwe Dludlu’s outfit were in charge with skipper Jessica Wade putting them in front in the 37th minute and were unlucky to go to the half time break with just a single goal after many attempts.

In the second half, not even the windy Port Elizabeth weather could stop Bantwana from raining in a glut of goals as Zimbabwe withered under constant attack.

Speaking after the game, a proud Dludlu admitted she was impressed by her players'response.

"It was a better performance not in terms of goals but rather the way the team did the right things at the right time which was an improvement from the last game".

The coach admitted that every win now is a confidence booster and was highly impressed by the high scoring tempo.

South Africa u17 side face Tanzania in their next encounter on 8 November and will be hoping to maintain the same form.

Tweet
More in this category: « Salah proud of Egyptian teams reaching Champions League final. Wallabies produce second-half comeback to edge past the All Blacks in a thriller. »
back to top