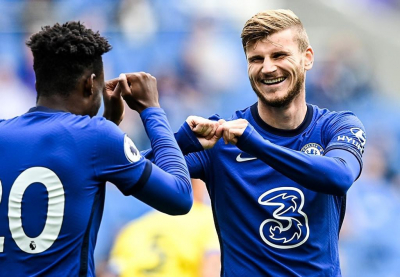 Chelsea came from behind to beat Sheffield United comfortably at Stamford Bridge, leaving the visitors bottom of the Premier League on another frustrating evening for Chris Wilder's side.

David McGoldrick gave the Blades the lead in the ninth minute with a deft flick from close range.

But Tammy Abraham's scuffed half-volley bounced past Aaron Ramsdale for Chelsea's equaliser, before Ben Chilwell touched in Hakim Ziyech's cross at the back post.

Ziyech turned provider again after the break when Thiago Silva headed in his free-kick at the near post, before Timo Werner added a fourth.

The result leaves Sheffield United with one point from their opening eight matches, while Chelsea move up to third, a point behind leaders Southampton.

Tweet
More in this category: « Barcelona thrash Real Betis with Lionel Messi bagging a brace. Lewandowski keep up his sensational Klassiker form as Bayern Munich tops Bundesliga. »
back to top