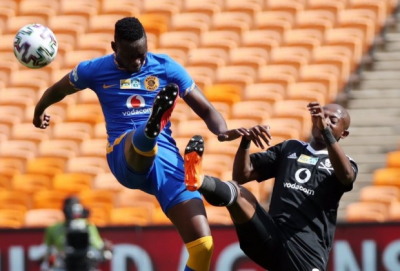 Coach Gavin Hunt made three changes to the team which faced Galaxy with Yagan Sasman, Anthony Akumu and Leonardo Castro all making their return to the starting line-up.

While the Buccaneers were looking to avoid a defeat in order to reach the final following their 1-0 win over Bloemfontein Celtics midweek.

Coach Josef Zinnbauer, who had returned from Germany, made three changes to the team which took on Celtic with Thulani Hlatshwayo, Fortune Makaringe and Deon Hotto all making their return to the starting line-up.

Chiefs applied some early pressure on the visitors as they wanted to grab an early goal which could unsettle Buccaneers.

Amakhosi suffered a blow when their influential right-back Reeve Frosler went down injured and he was replaced by Siphelele Ntshangase just 23 minutes into the game.

Lazarous Kambole missed a glaring chance to halve the deficit five minutes later as his search for a much needed goal continues before Mntambo stroked his chip attempt inches wide at the other end of the pitch with Daniel Akpeyi well off his line.

Chiefs were then reduced to 10 players in stoppage time when Erick Mathoho received his second yellow card and ultimately, Pirates emerged 2-0 winners on the day.

Pirates will now take on Bloemfotein Celtics in the final after winning the semi-final tie 5-0 on aggregate.

Tweet
More in this category: « City confirm that Mobara and Mkhize tested positive for coronavirus. Daniil Medvedev beats Alexander Zverev to win his first Paris Masters final. »
back to top