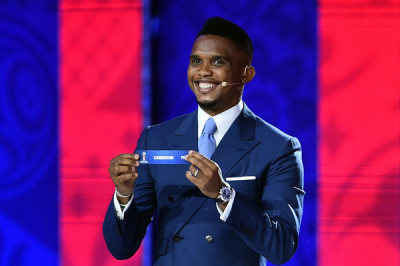 The 39-year-old was travelling between Douala and Bafoussam in Cameroon when the 4x4 he was travelling in was involved in a head-on collision with a bus.

The front end of the 4x4 was badly damaged but fortunately no-one was injured.

A spokesman for Eto'o, Frank Happi,confirmed that the former Barcelona star had no injuries after visiting a hospital for a check-up.

Eto'o decided against pressing charges against the driver, who had initially tried absconding from the scene before being apprehended and taken to a police station.

Instead of taking legal action, there is video footage of Eto'o talking to the driver and urging him to drive more carefully.

Eto'o retired from football just over a year ago, after a lengthy and successful career.

The Cameroonian played for Real Madrid, Barcelona, Inter Milan, and Chelsea among many others, winning multiple league titles, as well as three Champions League trophies.

He is also an Olympic gold medallist, and won the African Cup of Nations with Cameroon in 2000 and 2002.

He is the Indomitable Lions' all-time leading goal scorer, having found the net 49 times in 97 games for his country.

Tweet
More in this category: « SAFA confirm Patrice Motsepe to run for CAF Presidency. Virat Kohli will miss final three Tests of India's series in Australia. »
back to top