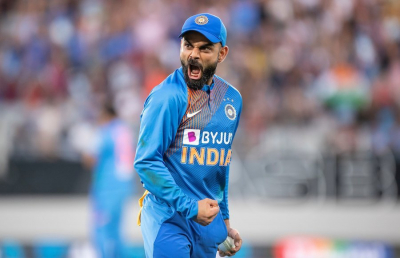 India captain Virat Kohli will miss three of the four Tests on this winter's tour of Australia to be at the birth of his first child.

The 32-year-old, one of the world's leading batsmen, will return home after the first Test starting on 17 December.

His wife, actress Anushka Sharma, is due to give birth in January.

Anyone arriving in Australia must quarantine for 14 days, making it impractical for Kohli to rejoin the squad.

The second Test in Melbourne begins on 26 December, followed by the third in Sydney from 7 January, before the final Test in Brisbane on 15 January.

He will play in the three Twenty20s and three one-day internationals that precede the Test series.

Kohli has captained in 55 Tests, five short of MS Dhoni's India record, and is second in the International Cricket Council's Test batting rankings.

He led India to a first Test series victory in Australia in 2019.

The Board of Control for Cricket in India confirmed in a short statement: "At the selection committee meeting held on October 26th, 2020, Mr Virat Kohli had informed the BCCI about his plans to return to India after the first Test in Adelaide.

"The BCCI has granted paternity leave to the Indian captain. He will return after the first Test against Australia in Adelaide."

The series is the biggest since cricket returned from the coronavirus shutdown and Kohli's absence will arguably tip the scales in favour of the hosts, who hold top spot in the ICC Test rankings by a tiny margin over New Zealand and India.

Tweet
More in this category: « Samuel Eto'o unhurt after car crash in Cameroon. Sergio Garcia withdraws from Masters after positive coronavirus test. »
back to top