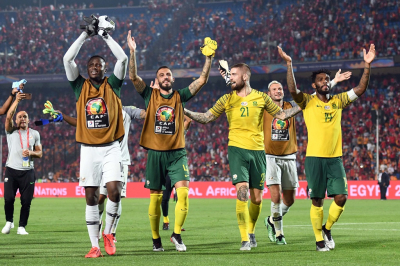 Bafana Bafana coach Molefi Ntseki believes his players are in a good frame of mind going into Friday’s Cameroon AFCON qualifier against Sao Tome in which maximum points are non-negotiable.

Following the late arrival of Bongani Zungu who did light training on Wednesday, Ntseki says the boys are raring to go.

‘’We are happy that the whole squad is here. We will have our last training session on Thursday with the 24 players that have been called up to this camp.

‘’The preparations have been going on very well and the players are really looking forward to the match and the interest from everyone is amazing. The guys want to do well for the country and for themselves and that is a positive sign,’’ said Ntseki on Thursday.

The Bafana Bafana coach said the team was well aware of possible pitfalls and the last thing they would want to do was to underestimate the islanders. He said no team should be regarded as underdogs anymore as the global game has revolved a lot.

‘’We have prepared well mentally, physically and tactically and we want to take maximum points in these two games. We will be in a position to execute our play, come Friday,” he added.

The Bafana Bafana mentor said they were looking at one game at a time.

‘’We can only strategize for Monday’s game after the first one. Let us all go there and enjoy ourselves and support the team with the hope that everything will go according to plan.’’

Friday’s encounter at Moses Mabhida Stadium kicks-off at 21h00 and will be live on SABC 1.

Bafana Bafana leaves Durban for Port Elizabeth the following day, Saturday 14 November and will have a late training session on the same day before wrapping up preparations on Sunday.

The match on Monday will kick off at 15h00 and is also live on SABC.

Tweet
More in this category: « Banyana Banyana book their place in the Cosafa Women’s Championship final. Another special SA Open moment for Gary Player. »
back to top